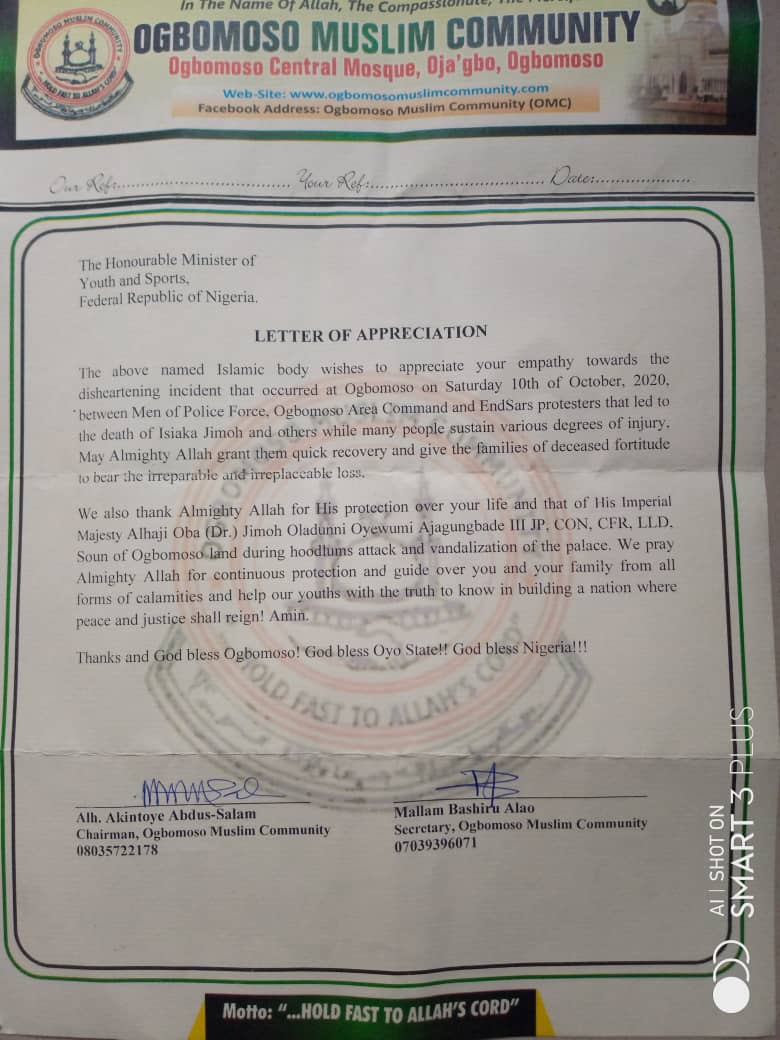 ….As Ogbomoso Muslim Community thanks Minister Dare for his intervention.

The cloud was covered by hullabaloo and bloodshed in Ogbomoso on 11th October, as police confrontation with #EndSars protesters resulted in the death of one person and the injury of several people in the town.

It took the timely intervention of the Honourable Minister of Youth and Sports Development, Mr. Sunday Dare, who has proved beyond a reasonable doubt that he is a man of peace and an advocate of youth wellbeing, to avert further bloodshed in the ancient town of Ogbomoso.

Sunday Dare was the first senior government official to arrive at Ogbomosho on hearing the scary report of the crisis that erupted during the #EndSars protest the day before. The report has it that the protesters were attacked by the Nigerian police which led to the killing of one of the protesters and scores injured.

The Minister on hearing the report swung into action by sending one of his aides in Ogbomoso, his hometown, to the scene and ordered that the victims be taken to the hospital and treated. He footed the hospital bills and paid for surgery fees for the removal of bullets on the legs of two protesters.

Furthermore, the Minister was the first senior government official to pay a condolence visit to the family of Jimoh Isiaka, a young vibrant boy who was shot during the crisis between police and the protesters. The Minister also visited injured teenagers at the Bowen Hospital, Ogbomoso, both victims of police stray bullets.

Mr. Dare vehemently condemned the shooting and attack on the #EndSars protesters by the police in a report and immediately demanded a thorough investigation of what led to the crisis.

A report on the incident reads: “It is important for the police force to fish out officers that have been involved in extrajudicial killings, violations, and harassment of the youths be brought to justice. He assured the youths of the government’s efforts to ensure that their demands are meet.”

In a bid to find a lasting solution to the crisis, the Minister arranged a meeting with the traditional ruler, the Soun of Ogbomoso, the Council of Chiefs, and other community leaders and the DSS at the palace to review the situation. During the meeting, a number of irate youth attacked the palace, destroying property and endangering lives. It took the combined effort of police officers on the ground to rescue the situation.

Here is the Minister’s statement after the attack on the palace:

“It was while the meeting was going on that hoodlums, thugs, and other miscreants stormed the palace to disrupt the meeting. As expected, my security operatives responded to protect me, the Soun, his chiefs, other leaders that were in attendance, and the NTA Reporter and Parrot FM journalist. My orderly and DSS operatives scurried us into safety upstairs and stayed with us to fully protect us. They did not fire a shot during the confusion created by the hoodlums.  It is still unfathomable how such a coordinated attack could be unleashed so swiftly.

“The rampaging protesters broke into the palace, destroyed chairs, overturned tables, and broke windows and every valuable thing on sight. I want to state that I do not believe that the people that invaded the Palace of Soun of Ogbomoso were neither Youth nor Students. They were miscreants and thugs who saw a window of opportunity in the genuine protest against SARS by peaceful protesters.”

The Minister further demanded that the Inspector General of Police (IG) facilitate the release of youth arrested by police during the peaceful protest.

“Reports reaching me personally and out there in the media reveal that a number of our youth are under arrests, while some continue to suffer harassments and threats to life for participating in the #EndSARS protest. In the new spirit of change, rapprochement, and expected reforms that are sweeping through the entire Police Force, kindly use your good office to authorize a signal to be sent to all police formations and stations to free these youth and to stop the intimidation of those who participated in the protests in any form.

Peace has since restored to the ancient city of Ogbomoso following the Minister and the Monarch’s appeal to the youth.

“I once again join the Soun of Ogbomoso and other leaders to appeal to the youth for calm in the face of police brutality which must stop. We must all work together to give peace a chance.”

No doubt, the Youth Minister’s presence, and other stakeholders’ interventions averted further bloodshed in Ogbomoso. He was a steady hand in the midst of a very trying situation. He deserves commendation for being alert and taking action and seeking to engage