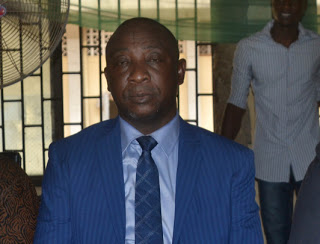 Group petitions sports ministry on the position of NFF chairman of chairmen.

A group of learned stakeholders under the auspices of NIGERIA FOOTBALLERS UNION (NFU) have petitioned the Nigeria sports minister, Sunday Dare, over the position of chairman of chairmen currently being occupied by Zamfara state FA chairman, Ibrahim Gusau.

Rising from a meeting held in Abuja Monday, chairman of the group, Salihu Ahmed Aliyu said their position became necessary following series of decisions taken by Gusau a man whose position as member of the current NFF executive committee is said to be illegal and unconstitutional.

The group have therefore petitioned the honourable minister of youth and sports to impress it on NFF president Amaju Pinnick, to advise Gusau to step aside pending the conclusion of an investigation into the legality of his election as chairman of chairmen.

In presenting their arguement, the group clearly quoted article 33 of the NFF statutes and came to the conclusion that the election that brought Gusau in as chairman of chairmen in 2014 in Warri and Katsina in 2018 are both defective, illegal and outrightly unconstitutional.

However, Alhaji Ibrahim Gusau election was contested on the floor of the congress with the Referees, players Union the leagues taking part in the voting process.

This in itself, is a breach of the statutes and goes contrary to the laws governing the conduct of NFF elections.

The group expects that Ibrahim Gusau will be asked to step aside immediately, pending the conclusion of proper investigation of this matter. They are threatening that if urgent action is not taken by the ministry or the NFF, they will head to a court of competent jurisdiction to seek redress.

The two paged petition was signed by all 8 members of the group who claimed that their intention is to bring sanity to football in Nigeria.