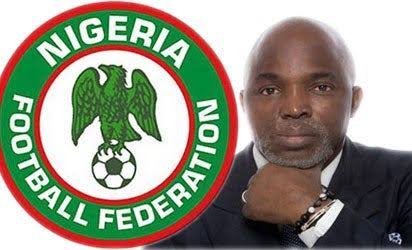 NFF president Amaju Pinnick may have shot himself on the foot as top shots in his executive committee held a secret meeting in one of the North Eastern states on Friday with just one agenda at heart.

The meeting became necessary as the members, all Northerners, took turns to condemn in strong terms recent decisions taken by the president in the aftermath of the Anambra state FA election.

The four board members told this reporter that they are aware that Amaju has got some dirty tricks off his sleeves of late and that they are not ready to be caught napping. They are particularly disturbed by his new found love for Zamfara state FA chairman Ibrahim Gusau whom they say has shown of late, that he is on a desperate mission to run as Amaju’s running mate in his proposed third term ambition.

” We are not fools, yes we are not fools. Because we have decided to stay calm and quiet doesn’t make us fools. We have watched the ongoing drama in Anambra state and as key stakeholders, we will like to dissociate ourselves from all that transpired before, during and after the election.

What Amaju and Gusau did is totally against the NFF statutes and we do not want to be a party to it.

What we really dont understand is the motive behind this decision as other members of the executive committee were not carried along. It is purely Pinnick and Gusau’s agenda and we really want to know what is happening another member said.

Friday’s meeting had just four of us in attendance but we have started talking with other board members on the need to form a conmon front and send a strong message across, another board member said.

The fourth member who also spoke on condition of anonymity said they are aware of Amaju’s third term ambition which according to him is not in the statutes even though they know that Gusau has assured him that he has an overwhelming influence on the Northern FA chairmen and can easily get them to endorse it.

This is the reason why Amaju has decided to get more closer to Gusau of recent because he reckons that he is very influencial and powerful. We have decided to talk now before it is too late. We are all elected board members and we cannot sit and watch things go completely out of hands he said.

NFF chairman of chairmen Ibrahim Gusau who also doubles as chairman of Zamfara state football association was in Awka on Thursday to inaugurate the 6-man caretaker committee appointed by the NFF after they annuled the visual election done on Sunday August 2, 2020, by the Jude Anyadufu led electoral committee