The General Assembly of the Nigeria Basketball Federation has passed a Vote of Confidence on Engr Ahmadu Musa Kida as President of NBBF following the laudable achievements recorded under his watch since taking over in 2017.

The Annual General Assembly which had 28 out of 36 states of the Federation and the FCT in attendance unanimously passed a vote of confidence on the leadership of the NBBF alongside the board of the NBBF.

The Assembly which had the Hon. Minister of Youth and Sports, Barrister Solomon Dalung, FIBA representative, Mr Hesham EL- Hariri and the Nigeria Olympic Committee 2nd Vice President, Barr. Francis Orbih in attendance appreciated the achievements recorded by the NBBF Board in the last 1 and half years.

The delegates highlighted Afrobasket Women’s Basketball championship triumph in Mali in 2017, the Afrobasket silver medal winning feat of the D’Tigers as well as the exploits of D’tigress at the FIBA Women’s World Cup in Spain where the Team set an African record by reaching the Quarter Finals for the first time.

They reckoned that such achievements which also included D’Tigers qualification for the FIBA Men’s World Cup in China as well as the successful hosting of the World Cup Africa Zone Qualifiers 3rd and 4th window could not have been possible without Kida’s quality leadership.

The Assembly urged the Board not to relent in its effort to see that Basketball is well grounded in Nigeria while expressing optimism that the domestic league will soon become a thing of pride.

FIBA, through its representative, EL- Hariri praised the NBBF for putting together a successful Annual General Assembly.

The FIBA Africa Zone 5 President and member of FIBA Africa Central Board stressed that he was in Nigeria on the directive of FIBA to observe and convey FIBA’s total support which is a confirmation and approval of the Annual General Assembly.

Meanwhile, the Assembly considered the Draft NBBF Statutes, received contributions from the accredited delegates and after a thorough review unanimously approved, ratified and adopted the Statutes which is to be called: The NBBF Statutes 2019.

The Assembly also unanimously approved the 2019 NBBF program of activities as presented by the NBBF board while also approving the NBBF 2017 and 2018 Audited Financial Report.

Kida thanked all the delegates for believing in the leadership of the NBBF as it repositions Basketball in Nigeria for stability, sustainable growth and development. The NBBF President assured that the Board will not betray the confidence reposed in it. 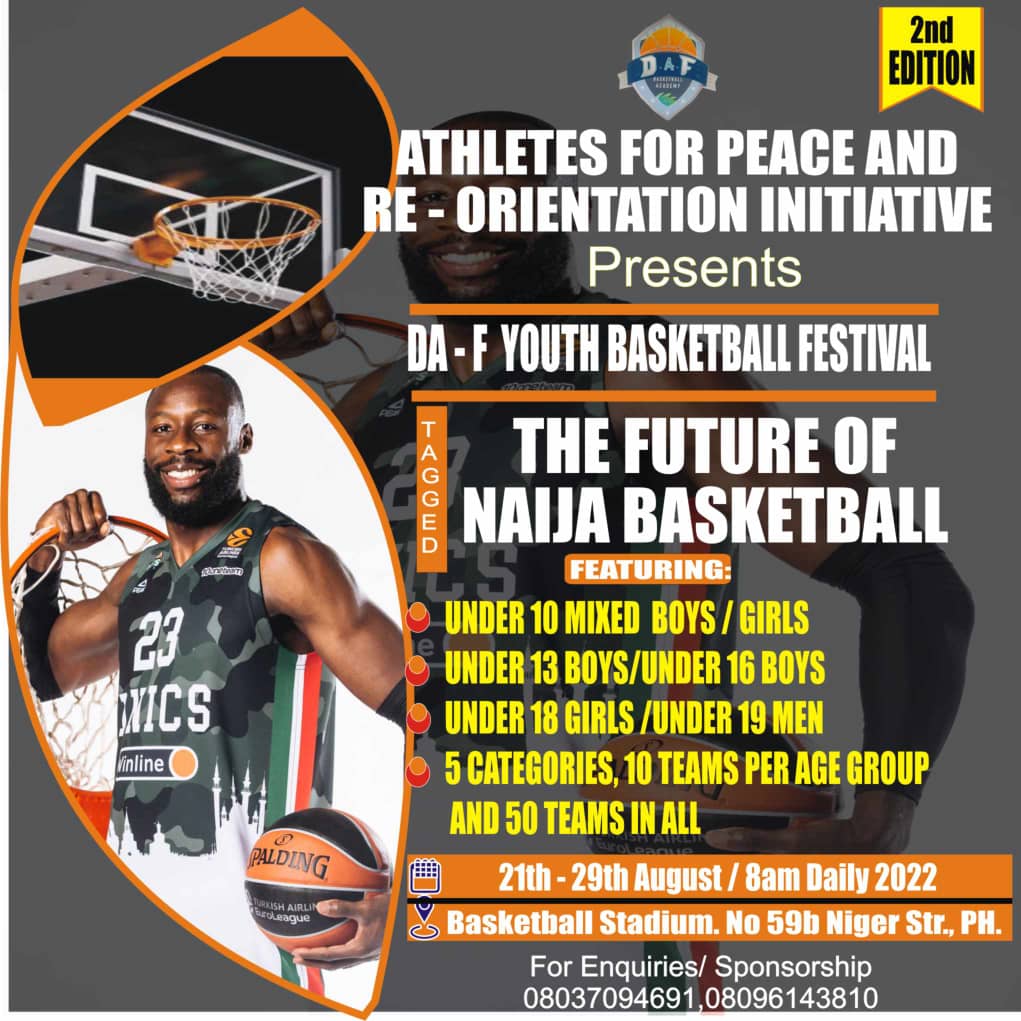 The organisers of DA-F Basketball Festival have promised that the 2nd edition of the tournament slated to hold August 21-29, 2022  at the basketball stadium, Niger Street, Port-Harcourt would be better,bigger and exciting.
The tournament which is hosted by Athletes For Peace Initiative in conjunction with Rivers State Basketball Association is a week long event would featured over 50 teams in five different categories for boys and girls aged 10-19 years.

The organisers shall provide accommodation at the Alfred Diete Spiff Sports Complex, Civic Centre, as well as, meal subsidy for teams coming from outside Rivers State.

There shall be medals and plaques for outstanding participants in each category.