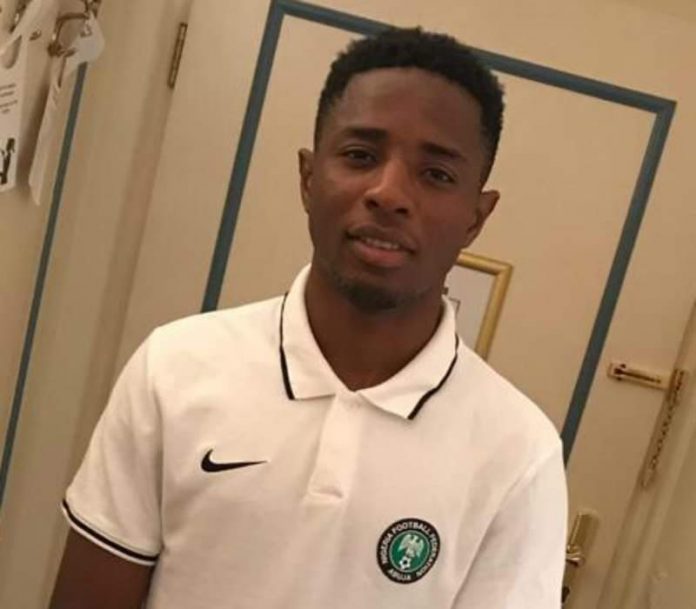 Flying Eagles’ forward Success Makanjuola says the 2019 FIFA Under-20 World Cup which gets underway in Poland next week will provide a perfect opportunity for him to excel.

Makanjuola, while speaking Thursday with www.bsnsports.com.ng (BSN Sports) from the team’s training camp in Germany, said he was itching to fully utilise Poland 2019 like others before him.

The player fondly called “Light’’ by his admirers said being picked for the national under-20 male team by coach Paul Aigbogun was a great opportunity he was going to fully utilise.

“I’m glad to make the team. It’s a great opportunity I have been looking forward to over the last few years and I bless God’s name for making it happen now, ” Makanjuola, who has been rated as one of the biggest players to shine at the World Cup in Poland, said.

He was no doubt an obvious choice for Aigbogun and his technical crew colleagues at the Flying Eagles.

Having lost the chance of having Samuel Chukwueze, who chose featuring for the Super Eagles at the 2019 AFCON in Egypt instead of Poland 2019, Aigbogun was treading the right path.

The coach’s decision to name the technically-gifted Makanjuola in the 21-man list for Poland as a perfect replacement for Chukwueze of Spanish La Liga side Villarreal has been quickly justified.

Makanjuola emerged Man Of The Match in his first game for the Flying Eagles, on Tuesday against Austrian Bundesliga II side Red Bull Salzburg in a friendly which ended 1-1.

He showed that he has tremendously improved in the last two years and could be a poster boy for the Nigerian team with his dazzling qualities.

“Lionel Messi (of FC Barcelona and Argentina) has been a player I always learn from in every game he plays.

“Because I have been learning from him over the years, my dribbling skills and abilities have made whoever watches me play to draw comparison with Messi,’’ Makanjuola said.

The player who is few weeks away from clocking 18 years of age has however also shown he is wise beyond his years.

With a heart full of determination, as well as his strength and speed, Makanjuola believes he has learnt a lot from his favourite player has and would still learnt a lot.

“The only player I always look up to is Lionel Messi. I derive every playing pattern from Messi. He’s my idol and I love him. I love the way he plays and I have understudied his playing style to shine as a player and I dream of getting to his level in the future.

“It will be a miracle from God Almighty to see another player like Messi today, but with God permitting I have something better to show and to prove what I have learnt from him in the past few years.

“Already, the Flying Eagles’ coaching crew has built my confidence in the team and I am ready to play with my team mates and we are all ready to give our best in every game we play.”

Makanjuola, who shoots well and plays with the experience of a veteran, and he believes his youthful speed and deceptive strength will allow him to make a big impact.

“I am ready for the journey of gold and by the grace of God and our self-determination, focus, discipline, prayers, diligence and fans’ support we will make it happen.”

The player who is a product of Water FC of Abuja, the same youth academy which produced Babatunde Michael, is also optimistic of covering further ground with the Poland 2019 outing.

Makanjuola believes he can use the FIFA U-20 World Cup to earn a place in one of the biggest clubs in Europe.