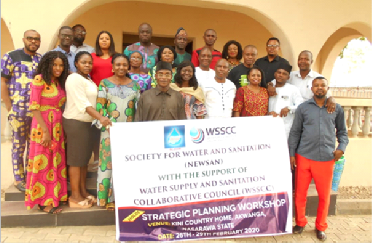 The National Coordinator, Society for Water and Sanitation (NEWSAN), Benson Attah has said that available data in 2018 showed that 50.5 per cent of the households still lack access to improved latrines in Ekiti state.

Attah stated this during a courtesy visit to Ekiti State governor, Kayode Fayemi on Thursday in Ado-Ekiti.

He said the visit was aimed at commending the state government on its achievements so far in improving access to potable water and to strengthen its advocacy in that regard. While commending the state government in its achievements so far in ending open defecation practices in both rural and urban areas, and in scaling up Water, Sanitation and Hygiene (WASH) services in the state, Attah said there was a need for more commitment to enhancing efficient service delivery, noting that support was from the Water Supply and Sanitation Collaborative Council (WSSCC).

He said that the state chapters of NEWSAN had been trained with other six states on mutual accountability and advocacy skills for Civil societies, adding that the impact would help in meeting the global goals.

Attah noted that a recent study showed that information on budget tracking and implementation was low, just as he said that the availability of an Open Defecation Free roadmap was impressive.

He called on the governor to support WASH departments in all local government areas of the state and also strengthen monitoring and evaluation in water and supply project implementations.

In his response, Governor Fayemi noted that the state had prioritized the provision of potable water and sanitation to its citizens, saying this has led to the development of an investment plan in WASH.

He said all highlighted issues were being addressed, pledging to continue to support CSO engagements for better service delivery and to increase budgetary allocations for the provision of potable water and hygiene services to its citizens.

The state commissioner for Infrastructure and Public Utilities, Mr Bamidele Faparusi, noted that all identified gaps have been addressed with the new policy recently passed by the state executive council.

Faparusi said an Open Defecation Free roadmap by 2022 was being inaugurated and implementation commenced, adding that a counterpart funding of N200 million was given to support WASH activities in the state.

“We are the first state to launch the ODF Roadmap by 2022, the political will is there, and we will improve our ratings”.

The commissioner said with the advent of COVID-19, emphasis on hygiene promotion was taken to the front burner, adding that a task group to monitor hygiene practices in all MDAs was already working.