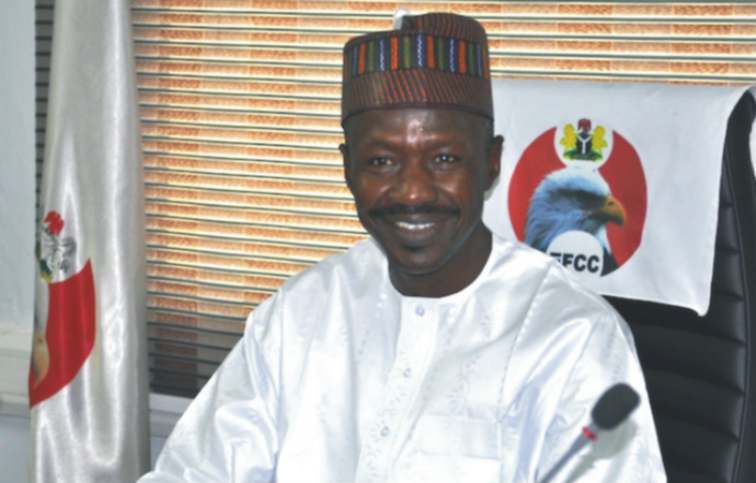 The Acting Chairman of the Economic and Financial Crimes Commission (EFCC), Ibrahim Magu, was eventually detained on Monday night after he was grilled by a panel at the Presidential Villa for about eight hours, The Nation is reporting.

The Panel, according to the highly-rated newspaper, is headed by a retired President of the Court of Appeal, Justice Isa Ayo Salami.

Magu was said to have been taken to the Force Headquarters in Abuja by operatives of the Force Criminal Investigation Department, where he requested to be detained inside a cell and not allowed to sleep in one of the offices there as he was offered.

Before then, Magu, who was accosted as he left the EFCC office at about 1:35 pm, had his security details withdrawn.

When the questioning ended at about 10:20 pm, Magu was told he had to go in a Hilux van to the Force Headquarters for him to be detained.

However, after a brief discussion, he was allowed to ride in his official car to the Force Headquarters, where he was detained overnight.

He arrived at the Force Headquarters at about 10:50 pm.

There are indications that the grilling will continue on Tuesday (today).

According to available information, Magu was grilled extensively on the allegations leveled against him by the Attorney-General of the Federation and Minister of Justice, Abubakar Malami (SAN).

Malami had raised a cocktail of allegations against Magu in a memo he sent to President Muhammadu Buhari.

He equally recommended those who should replace him.

Some of the allegations against him are:

. Alleged discrepancies in the reconciliation records of the EFCC and the Federal Ministry of Finance on recovered funds

. Declaration of N539billion as recovered funds instead of N504b earlier claimed

. Insubordination to the office of the AGF by not seeking his approval on some decisions

. Not providing enough evidence for the extradition of ex-Minister of Petroleum Resources, Diezani Alison-Madueke

. Alleged late action on the investigation of Process and Industrial Development (P&ID) leading to legal dispute

. Not respecting court order to unfreeze an N7 billion judgment in favor of a former Executive Director of First Bank

. Alleged delay in acting on two vessels seized by Nigerian Navy leading to the loss of crude

. Reporting some judges to their presiding officers without deferring to the AGF

. Alleged sales of seized assets to cronies, associates, and friends

. Alleged issuance of investigative activities to some media prejudicial to some cases.

Many Sin Of Suspended Magu- Malami