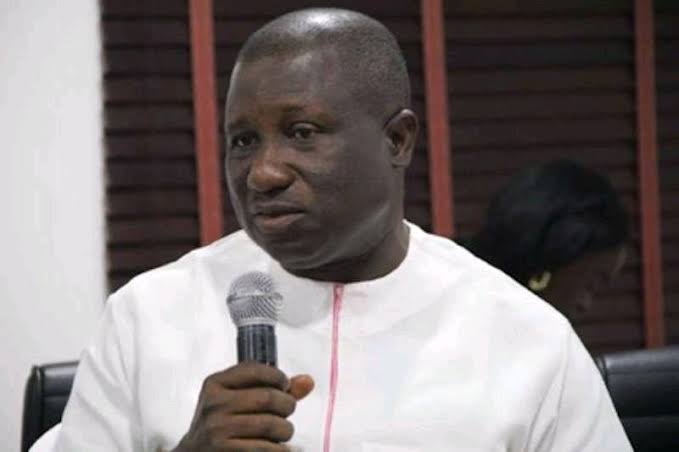 Nigeria Premier Football League NPFL, Interim Management Committee IMC has described the rumour from section of football stakeholders of giving N100 million to the Minister of Youth and Sports Mr Sunday Dare as his percentage from the GTI, TNFF League sponsorship deal, as people with paid blackmailers and enemy of the league who are beneficiary of bad system and doesn’t want the progress of the league.

Chairman of the IMC Hon. Gbenga Elegbeleye stated this in an interview with a journalist on Thursday in Abuja where he blasted those rumour Monger and tagged them as people with  a sick mind and WhatsApp data boys who are suffering from jaundice.

It will be recalled that there was gossip going round that GTI through TNFF dropped N1 Billion sponsorship and Sports Minister got off the money which is 100 million percentage.

Hon. Elegbeleye who cleared air on the GTI and TNFF NPFL Sponsorship deal revealed that, only money received from sponsors was N200 million given to 20 NPFL Clubs and the money was not given to IMC, it was credited to the account of the clubs directly by the GTI group themselves.

According to him, such insinuation can only come from a sick mind, from a jaundiced mind or paid blackmailers. GTI will be reading and listening to us right now, they did not give us a dime. The only money given to clubs was 200 million.

“They gave 200 Million to all the 20 clubs at 10 Million per club and this money was not given to us at IMC. They are not official sponsor of the league, they are just purpose vehicle, they are bankers, and they promise to help us raise fund, using their own image and credible organization and we believe in them but we says before we go ahead please how can you help our 20 Premier league clubs for a Start, because we need support to kick start the league.

“We agreed that, let’s give them N10million naira to each club to kick start, and this money was not given to IMC, it was credited to the account of the club directly by the GTI group themselves.

“Even, the referee’s emolument and bonuses, they paid for it themselves.

“Also, the live show on NTA and others media engagement, they are the one paying for it, we didn’t get anything from them, so for anybody to now say, GTI give IMC 1billion naira and IMC now gave Sports Minister 100 million percentage can only come from beneficiary of failed system.

“I know for sure that Sports Writers in Nigeria are credible. I am sure anybody carrying such a rumor is a WhatsApp data boy who is not a journalist, a real journalist will not have such a mind.

“What the sponsor say in the deal, is that between now and next 10 years football season, they will help us to grow our football to have a 10 billion naira minimum commercial value not that they are giving us the 10 billion naira and up till now, IMC is yet to receive a dime from TNFF, GTI and anybody saying that, must be a paid black mailers, must be a beneficiary of the corrupt bad system.”

He therefore promised to leave no stone unturned to ensure Nigeria league get better.