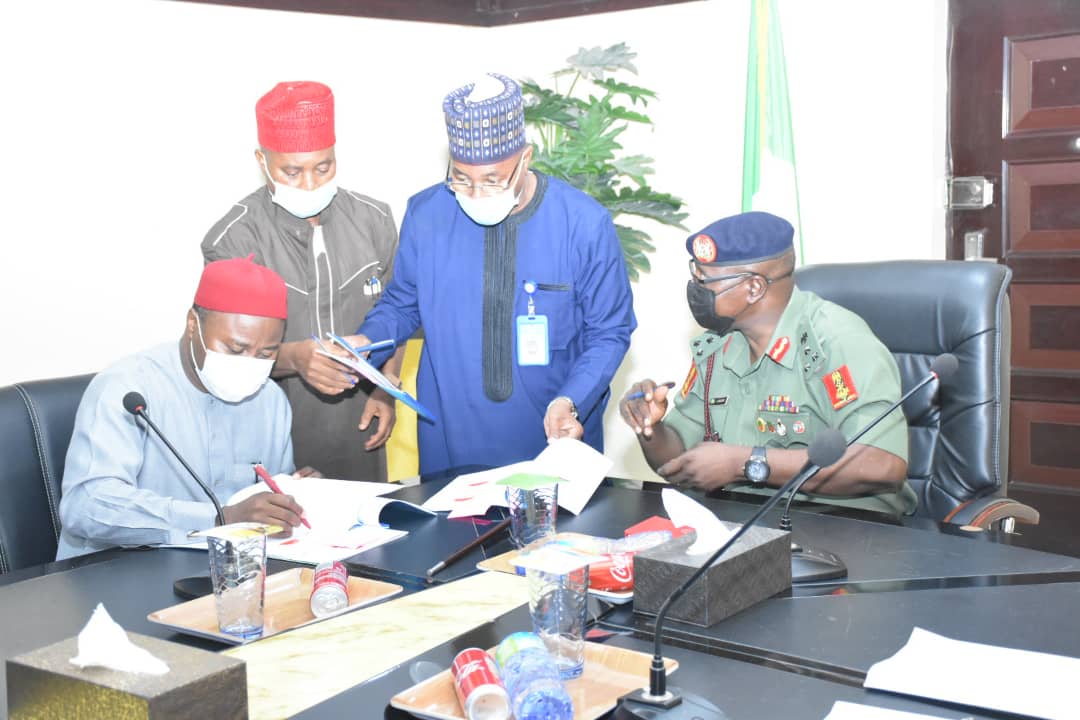 The National Youth Service Corps has signed a Memorandum of Understanding with the National Agricultural Land Development Authority to boost food production in the country.

He also lauded the Executive Secretary of NALDA, Prince Paul Ikonne, for his vision and strong passion for National development.

The DG said NYSC Scheme mobilizes more than 350,000 Corps Members annually and there was the need to tap their potentials for both personal and societal development.

He disclosed that the MoU would make the NYSC Farms become more active, with stakeholders’ support to enhance food sufficiency though the involvement of Corps Members.

General Ibrahim said NYSC introduced Skills Acquisition and Entrepreneurship Development Programme into its Orientation Course Content in 2012, in order to empower Corps Members with vocations and relevant skills that would reduce the increasing rate of unemployment among the youths.

“Many of our ex-Corps Members are fully established today in their States of deployment.”

“Our Corps Members are knowledgeable and very skillful, but they need public support with a conducive environment.”

“Be assured of our loyalty, as we are ready to move this partnership to the next level”, he said.

The Director-General renewed his appeal for the establishment of National Youth Service Trust Fund, whereby part of proceeds would be channelled as start-off funds for Corps Members to establish their businesses through the skills acquired during the service year, as well as maintenance of camp facilities.

He also appealed to Corps Members with passion in agric-business, to embrace the opportunity offered by NALDA through the National Young Farmers’ Scheme to be trained in modern farming methods.

Earlier in his address, the Executive Secretary, NALDA, Prince Paul Ikonne said there is the need for increment in food security for all Nigerians.

He commended NYSC Management for establishing Bakery and water factory, and rejiging its farms across the country.

Ikonne, who described Corps Members as active youths that should be made more productive stated that NYSC Orientation Camp in Jigawa State was used for the training of the first set of young farmers.

“Nigeria is in dire need of creation of job opportunities and when the youths are meaningfully engaged, there will be productivity”.

“NYSC will provide the land that would be used to train Corps Members while NALDA is very much interested in the partnership. The collaboration will boost the country’s Gross Domestic Product”.

“We are confident of a good and sustainable collaboration because NALDA and NYSC are Federal Government Agencies”, he said.

Ikonne disclosed that NALDA is planning to establish Integrated Farm Estate that would soon be commissioned, adding that the project is loaded with attendant value-chain benefits from crop planting to consumption.