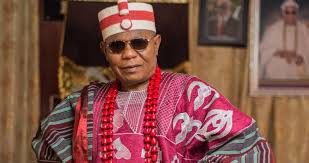 The Deji of Akure, Oba Aladetoyinbo Ogunlade has warned all the political gladiators in Ondo state to desist from any act that can bring the war to the state during the Saturday, October 10th Governorship Election.

Speaking on Tuesday in Akure at the Ondo state governorship election peace accord signing ceremony, he warns that there should be no war in Ondo during the election.

According to the traditional ruler, we don’t want any war in Ondo state, please advise yourself and your supporters as a soon as you leave this peace meeting go back to your various parties and advise them to abide by the rule and regulation.

Also speaking, the Inspector-General of Police, Mr. Mohammed Adamu assured that the Agencies would be neutral during the election.

“We are going to be professional to the core, the fundamental human right of individual will be protected and lives and properties will be safeguarded.

He called on political Gladiators not to consider the election as a do-or-die affair, saying that Security Agencies would deal with anyone attempting to disrupt the peace in any part of the State.