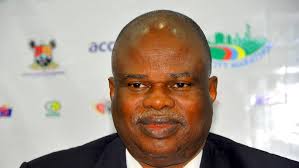 …As Brown Ebewele Indicts Ogba in another $150, 000 IAAF Scandal

The former President of Athletic Federation AFN, Solomon Ogba has tagged most of the Directors in the Ministry of Youth and Sports as wicked and evil people that do not want the progress of AFN and Sports at heart.

Speaking on why he resigned from AFN board in a Telephone interview, Ogba expressed: “It has been like this, every Minister that came left with a bad name, those Directors that are there are evil people, they remaining, maybe probably Tammy Danagogo who left with little dignity, every other minister left that place with a bad name something is fundamentally wrong, this country must look at this carefully and call people out.

People should respect the constituted authority, they have divided the board, we have two factions I can’t be at the board and seat down particularly when the one who appointed me to be on the board as philanthropist quota, so, I can’t be in the board that I know they have violated the rules with IAAF.

“When we talked about interference, I am talking about ministry for instance where ministry we have a meeting with some board members to impeach the President earlier this year and they wanted me to be a rubber stamp to that.

“There  was a congress called by the President and board meeting they scuttled effort of the federation to do that and they are trying to call a separate board meeting in Abuja tomorrow (Tuesday) I will not be part of that.”

However, a Present board member of the Athletic Federation of Nigeria AFN, Brown Ebewele has fingered, Solomon Ogba in another $150,000 scandal that just hit AFN.

It will be recalled that AFN was hit by another $150,000 scandal the World Athletics grant scandal.

Reacting to the scandal, Brown Ebewele in a telephone interview said that no one else could have collected the money than Solomon Ogba who was the federation president then.

According to him, that money was given to federation and no individual has access to the federation account its only federation that IAAF has business with.

When asked he is sure that the latest $150,000 sandal was collected under Solomon Ogba? He replied: Who collected it, it’s him now; Ogba said the money was sent to the LOC who was the chairman of LOC and what business does IAAF have with LOC instead of the federation?

I was a technical director as far back as 1997 when we hosted African Championship in Ibadan Oyo state, the IAAF gave us $90,000 as a grant, the money was paid into the federation account, and the IAAF only deal with the federation, IAAF does not have any business with LOC. It’s only in Nigeria that is like a banana republic that anybody will do anything and get away with it, Solomon Ogba is talking nonsense.” He said.