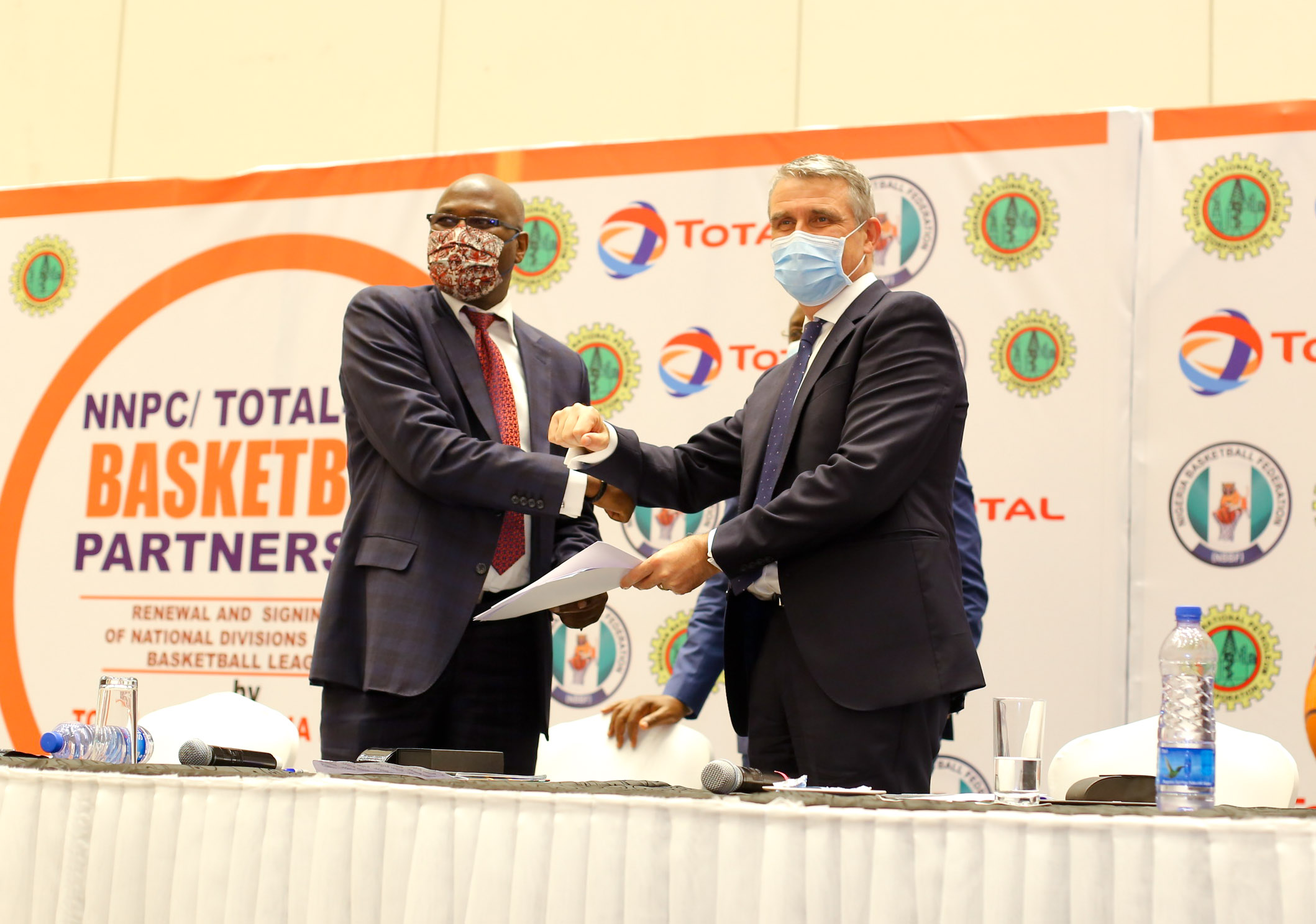 The Nigeria Basketball Federation has signed a 5-year deal with Total E&P Nigeria worth N150m ( One Hundred and Fifty Million naira) for the sponsorship of the Men’s Divisions One and Two leagues.

The NBBF and Total partnership which will run between 2020 and 2025 will see Divisions One and Two receiving fifteen million nairas (N15m) each annually to organize and run the leagues.

Speaking at the event held on Tuesday,  in Lagos which had the Minister of Youth and Sports, Sunday Dare in attendance, NBBF President, Engr Musa Kida said the sponsorship by Total E&P which is the first-ever partnership with the lower levels of basketball has opened a new vista in the corporate sponsorship of sports in Nigeria.

“Being satisfied with the concept and organization of the leagues in the past two years, we are very elated that Total E&P Nigeria Limited has now committed to extending their sponsorship arrangement with the NBBF for both competitions under the same framework for another 5 years (2020-2025)”

Commenting further, Kida thanked the Company for the confidence reposed in the NBBF by extending the sponsorship of the Divisions One and Two leagues for another five years as it underscores the commitment of Total E&P to develop Nigerian youths in all facets of life through their Corporate Responsibility objectives.

The NBBF President revealed that apart from the latest sponsorship, “Total E&P has also uplifted the NBBF in many spheres since this present board was inaugurated in 2017. For example, in addition to financial and related support to the NBBF, Total was the first corporate body to receive the men and women after their 2017 Afrobasket heroics.

“It is also on record that Total contributed to D’Tigers becoming the first country in the world to qualify for the 2019 FIBA World Cup in China after which Nigeria hosted two windows during the qualifiers”.

He promised the federation’s commitment to play its part in enhancing the success of the mutually beneficial partnership.

MD/CEO of Total E&P Nigeria, Engr Mike Sangster noted that their continued interest in developing sports and empowering youths in Nigeria coupled with the continued growth of basketball made the decision for the renewed partnership easier.

“The growth trajectory of Nigerian basketball since the initial agreement was signed two years ago, has proved to us that our decision to identify with the body was not misplaced. Indeed, we are particularly proud that one driver of the successes that have given Nigerian basketball the magnetic appeal it has today is our Deputy Managing Director (Deepwater), Engineer Ahmadu-Kida”.

Sangster noted that “The Nigerian grassroots basketball has been energized and repositioned with the Total sponsored Division 1 and 2 domestic leagues. The leagues have been expanded under a new format to enable over 150 teams to participate.”

For him, the recent gesture is a reflection of the company’s appreciation of the role of sports in harnessing the energy of young people, boosting productivity as well as nation-building.”

“The signing of this MoU demonstrates once again the goodwill and corporate social responsibility of Total E&P Nigeria in identifying with Basketball development in our country. This is transformational.”

He commended the NBBF President and his board for their consistency in making Nigeria proud with great achievements at both National and International levels.

“I must state here that Government is more than ever determined to provide a conducive atmosphere to stimulate corporate involvement in Sports development in the Country. I commend Total E&P Nigeria Limited for sponsoring the National Divisions 1 & 2 Men’s Basketball Leagues, as this is phenomenal.”

Kida thanked the Minister for his support towards the board and basketball development in Nigeria which has led to laudable achievements.

“At this juncture, I wish to restate the commitment of the board to redouble our efforts in putting proper and sustainable structures in a place that will take basketball to the next level”.

Also present at the signing was the Secretary-General of the Nigeria Olympic Committee, Banji Oladapo, the 2nd Vice President of NOC and President of Badminton Federation of Nigeria, Barrister Francis Orbih amongst other dignitaries.