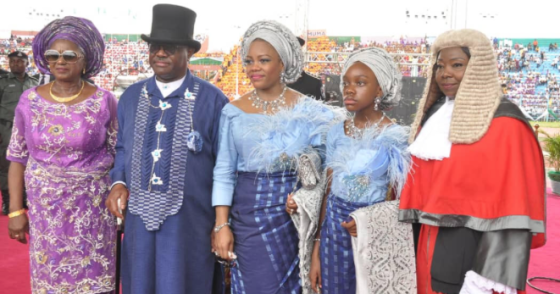 Nyesom Ezenwo Wike, re-elected Governor of Rivers State, on Wednesday, in the presence of thousands of Rivers people and other prominent Nigerians, took the oath of office to commence his second term.

Also, his Deputy Governor Ipalibo Harry Banigo was sworn in for a second term. Chief Judge of Rivers State, Justice Adama Iyaye-Laminkara administered the oath of office for the Rivers State Governor and his Deputy.

The swearing-in ceremony which took place at the Yakubu Gowon Stadium in Port Harcourt was a huge celebration as the arrival of Governor Wike was greeted by jubilation by the capacity crowd.

After mounting the saluting dais for the ceremonial police rituals, Governor Wike drove in the ceremonial open roof Land Rover Utility Vehicle to exchange pleasantries with the jubilant crowd.

This is the essence of the political mandate and burden that we will bear for the next four years and we will not disappoint you.

“We will continue to stand up for Rivers State and defend her interest, no matter the challenges or what comes at us”. The Governor said that his Administration is not in opposition to the Federal Government, calling for the partnership to move Rivers State and Nigeria forward.

But we are not a conquered people and we will never surrender our freedoms to anybody or entity, whether internal or external.

“We will therefore not accept to be subjugated to a headmaster and pupil power relationship; neither will we abandon the collective interest of Rivers State for the sake of political expediency.

“We are for the rule of law, democracy and mutual respect as autonomous State entities and co-building blocks of the Nigerian federation”