…Talk tough ahead of the final match

The new entrant into the National Women Zenith Basketball League, the Airwarriors Babes of Abuja have maintained six victories in a rolls in their first-ever appearance of the competition. 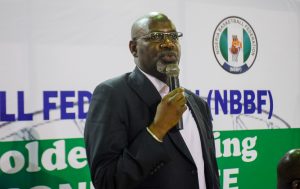 Airwarriors babes were too strong to whitewash Kanem Queen with 79-19.

Also, the Customs team also won 6 out of 6 games played so far having defeated FCT Wings team 73-37 at the Women league going on inside M.K.O Abiola National Stadium Package B Indoor court Abuja which will come to an end tomorrow Thursday. The 2019 Zenith Women Basketball League which started across four centers in the country has produced interesting results with top teams maintaining their pedigree in the game.

Both teams will now meet in a battle of titian on Thursday to determine who will be the winner of Savannah Zone which in Abuja. In the last game of the day, Plateau Rocks defeated Blackgold Queens  53-44.

Speaking ahead of the last games the Airwarriors Babes Coach Samson Sotimu expressed confidence that the team is up to the task to emerge, winner, tomorrow.

According to him, right now we had six games and we won all, so we are playing with an experienced team tomorrow, my girls too are up to the task so we would match them one by one.

“The hard work, the commitment, and team’s strive to win is now working for us because during the break we didn’t go for any break, we are still training and today we are seeing the result.”

As for Mr. Abdulmajeed Solademi, the Chairman and CEO of the Airwarriors Babes who expressed that Nigerian should be expecting more from his young team saying that his team will carry the day come Thursday.

“Those girls are very young, we can’t wait for the game, it will really be an interesting game.

“As usual, we will motivate the team more as we all know that, a journey of one thousand years begins with a step those girls are well prepared for this game and they are moving. I am really sure that they will win.” He assured.

On his own, the Head Coach of Custom Female Basketball, Abdulrahman Muhammed revealed that dream of every coach is to win a trophy and as far as I am a concern we are going to win.

“Game between Custom and Airwarriors Queens is not a big match; Airwarriors Babes is just a new team coming to the league we’ve been there for decades how do you think it’s a big one?

“It’s a new team coming into the premier league, we’re going to beat them tomorrow, and we have played Firstbank, Deepwater, Dolphins, etc. So, we can’t be playing Airwarriors Babes that are making their first appearance in the league and be saying it’s a big game. I am not saying they don’t have a chance of winning they can win as well but not the game.” He boasted.