The National Film and Video Censors Board (NFVCB) have applauded President Muhammadu Buhari policy for the ease of doing business in the country which has created enabling environment for all Nigerian as well as the growth of the creative industry in the Country. This even, as Federal Government as from 25th of November commenced Burning of all unclassified, uncensored foreign films.

Executive Secretary of NFVCB, Alhaji Adedayo Thomas stated this when he hosted Culture, Arts, and Tourism and Entertainment Writers Association Abuja CATEWAA saying films Industry remain the largest employer of labour in the country and the board is ready to leverage on the sector for the growth and development of Nigeria

According to him, I can tell you that between January and August this year, Cinema makes N4.4 billion and that was very small because there was an election.

“So if only 52 Cinemas that we created can generate 4.4billion within such period and 60% money generated is from domestic films so we need to create more way for domestic to strive.”

On the Burning of uncensored films, NFVCB Boss said: “So, all those foreign films are giving our domestic product a terrible platform and they can’t go the way they are supposed to go. Without those DVDs, we will be able to do a lot,”

“We are banning foreign films; any foreign films that make the standard with intellectual property right of the owner and must be presented to us for confirmation before we allow it 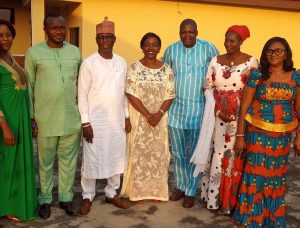 Giving the hint on how he turned NFVCB since he assumed office, Alhaji Adedayo expressed that, “when I assume office this place was already dead; I am not putting blame on anyone there is a misrepresentation of this establishment of the film industry.

“But because of my training as sound economic liberal advocates, I moved to the Senate, Ministry, and to others private well-meaning Nigerians and because of the interest of Mr President in the creative industry, we are able to move higher.

“The biggest film or theatre as we speak, 300 capacity seating with the latest equipment in terms of musical stage and studio in a few months will be open along Maraba, Nyanya axis this is the impact of  collaboration we are doing.”

He added: “Attitude of the staff to work has changed; today they are reaping the benefit. In term of staff welfare, nobody in the entire ministry of information and culture has beaten me to staff welfare.

“Over 300 staff has travelled within Nigeria while over 120 have travelled abroad for the international film festival and one training or the other.

“All the staff has received first-class capacity training all over the country and its growing.

“The legacy I want to leave is to see the film industry overtaken Agriculture and Oil sector, we will be comfortable to be in the third position if Oil and Agricultural sectors are still moving.”

In her earlier remarks, the CATEWAA Chairperson, Dr Bridget Onochie, expressed that the Association is mindful of the position and contributions of the Nigerian film industry to the economy, hence the need for greater collaboration between the Board and the media towards articulated publicity that will not only promote the industry but equally project the Board’s efforts at ensuring effective regulations on both artistic content and packaging of Nigerian films.

She the journalist are stakeholders in the Nigerian project, the Association can function more effectively as a partner in the Board’s programmes and activities, and expressed hope that the meeting will mark the commencement of an enhanced the mutual relationship between the Board and the Association.