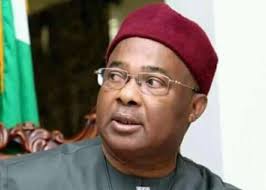 Members of the Imo State chapter of the Nigeria Union of Teachers (NUT) has commenced seven-day fasting and prayers in the 647 autonomous communities over non-payment of their three-month salary arrears.

The union gave the directive to commence the exercise in a statement issued by the state Secretary of the union, Godwin Osogwa and made available to journalists yesterday.

It urged teachers in the state to seek the face of God amid suffering, lamenting that in spite of their plight during the lockdown, they were not paid even as they were compelled to remain at home.

They expressed hope that only the Almighty God would touch the hearts of state government officials to pay them to enable them and their families to feed.

“You are directed to embark on seven-day fasting and prayers,” the statement stressed.

One of the teachers in the state, identified as Nkechi, told The Guardian that they were really suffering, saying they were being owed over three months arrears, lamenting that she was forced to explore alternative sources of income.

“It is really tough. We have not been paid since the COVID-19 pandemic. How do we survive? I will join my colleagues to embark on fasting and prayers,” she said.

Also, retirees in the state, numbering about 23,000 have given Governor Hope Uzodimma seven days to approve the payment of their over five months pension arrears.

They were protesting against the failure of the state government to fulfil its promise to pay their pensions by last weekend as Secretary to the State Government (SSG), Cosmos Iwu, had assured them.

The retirees issued the ultimatum during their second protest in Owerri during the week, saying they would ensure that they disrupt government activities until they were paid, even as they asked for alms on the streets of Owerri.

Speaking yesterday, Commissioner for Information and Strategy, Declan Emelumba, said the State Government had just concluded verification of the retirees’ records of service and payroll system.

He restated that massive fraud was uncovered in the process and charged the pensioners to exercise patience, assuring that they would be paid sooner than later.

Meanwhile, a Federal High Court in Owerri presided over by Justice Tijjani Garba Ringim, has ordered the immediate reinstatement of the 27 council chairmen and councilors who were elected in 2018 during former Governor Rochas Okorocha’s tenure.

But immediate past Governor of the state, Emeka Ihedioha had removed the affected elected officers in June last year and on the assumption of office on January 15, Uzodimma sacked Ihedioha’s Local Councils Transition Committeemen and replace them with his anointed officials.