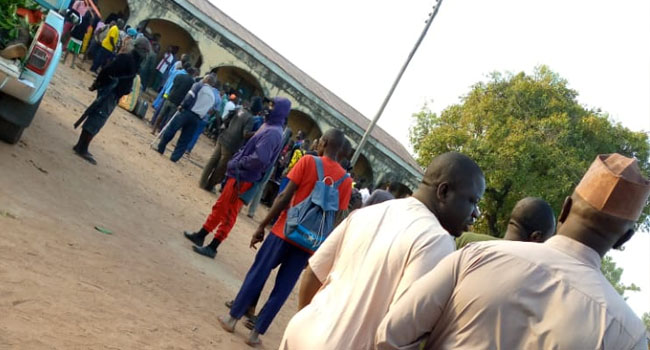 …As over 300 Jangebe school girls in Kidnappers den

Early hour of Saturday, the abductees from Government Science Secondary School Kagara, in Rafi Local Government Area of Niger State have been released.

A government official who confirmed the release to Channels TV said they are on their way to Minna, the state capital.

They are expected to be received by Governor Abubakar Bello at the Government House in Minna.

Twenty-seven students and 14 others were abducted from the school.

Gunmen had on February 17 stormed the school and whisked away 42 people, including 27 students from the Kagara school.

Sources told Channels Television that the armed men invaded the school at about 2:00 am and were shooting sporadically before carrying out their nefarious act.

Some teachers and their family members residing within the college staff quarters were also said to have been abducted by the gunmen.

The bandits were said to have worn a military uniform and entered the school premises which has about 1000 students, overpowered the security guard, before whisking away the students and staff.

Prior to that, over 300 students of the Government Science Secondary School, Kankara, Katsina State were also abducted in December 2020.

They were, however, all rescued shortly after.