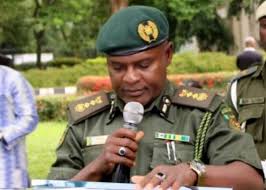 Joel Ajayi
The National Park Service on Monday revealed that the service has put in place measures to monitor the movement of about 250 elephants in a herd sighted around Kutila area of the Chad Basin National park (CBNP), a border between Nigeria and Cameroon, for their protection.
Conservator General of National Park Service Dr. Ibrahim Goni made this known in a statement issued in Abuja by Mr Yakubu Zull, his Media Assistant.
Goni said the new herd was captured through the aerial photo of United Nations Humanitarian Air Services (UNHAS) around Chingurmi-Duguma sector of CBNP a few kilometres from Rann during a humanitarian mission.
He said the service is already partnering with the Borno State government through the Director of Forests to ensure that the elephants are not killed in line with the initiative of `Monitoring of the illegal killing of elephants (MIKE).
“The elephants were reported to have destroyed some farms, so our experts will make sure that they are returned to their habitats safely and as well avoid more damage to people’s farms while at the same time keeping them away from poachers.
“It is interesting to note that the presence of security operatives in the CD has led to an increase in the sighting of Giraffes, Gazelles, Ostriches & lots of other animals.
“There are speculations that the elephants migrated from the Waza National Park in Cameroon and may have been displaced by flooding.
“I assure the public that we will trace their route and make sure they are safe.
“We will work with Chingurmi-Duguma Sector, the Nigerian Army and Cameroon’s Waza National Park to achieve that,’’ he added.
He said that due to insurgency in the region, human activity at the area is minimal and most of the villages are without human presence, thus the vegetation of the area started regenerating.
The C-G advised the public to keep away from the elephants wherever they sight them, and promptly notify the relevant authorities.